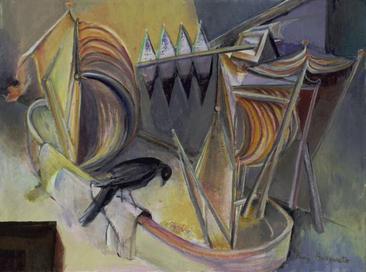 Surrealism is one of the most famous modern art movements, and ‘surreal’ a word that has entered our daily vocabulary. Yet what is ‘surrealism,’ where exactly did it come from, and how exactly did it influence twentieth-century British art? Looking at artists as diverse as William Blake, Francis Bacon, Henry Moore and Paul Nash – as well as writers such as Samuel Taylor Coleridge and Lewis Carroll – this lecture answers all those questions and more.

David Haycock read Modern History at the University of Oxford, and has an MA in the History of Art and a PhD in British History. He is the author of a number of books, including Paul Nash (2002), A Crisis of Brilliance: Five Young British Artists and the Great War (2009) and Augustus John: Drawn from Life (2018); he has lectured widely at galleries and museums in the UK, including Tate Britain, the National Portrait Gallery, the Royal Watercolour Society and Pallant House. He was formerly a Research Fellow at Wolfson College, Oxford, and at UCLA, and was Curator of Maritime and Imperial History at the National Maritime Museum in Greenwich. He is now a freelance writer and lecturer